The Cowboy and his Cow 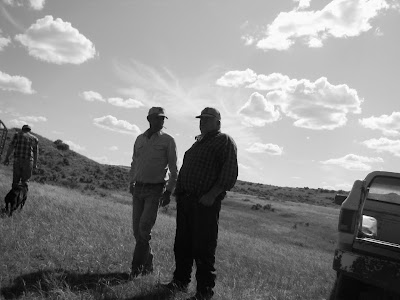 Abbey wants all the cows off public land. I agree with him, especially in beautiful marginal Utah where it takes a minimum square mile to barely keep a 'slow elk' alive. There's no way to buy enough land for a living's worth of cows in most of the arid West. Actually, most of our beef comes from the East anyway. But the whole reason these people live in the no man's land just this side of Canada is because the Government needs them to. The land has to be populated, even if barely, by your citizens to keep it part of the country. That's what land grants and land leases are all about. We can't forget that land is the fundamental resource, the reason the Cold War was between the two superpower continental empire mirrors with interiors populated with welfare peasantry.

This photo is from sheep docking time on the Twitchell Ranch in Garfield County - cutting off testicles and tails. These are good people with a genuinely original American culture built on generations of tradition - but it started with politically motivated land grants. They get rights to graze public land from the government, but that's about all they get. If they want a school, they build it. If they want to keep a road, they maintain it. If there is a fire, they put it out. Land grants might not make much sense anymore, but we can't just cut them off.
Posted by Luke Padgett at 15:16