So I'm here sippin on a bottle of Kumbucha (what?) in a supremely premeditated natural foods store. I've been in North America now officially for one month. The first two weeks of that were spent with good friend Cameron Kuhlman torching fossil fuels all across the highline between Oregon and Michigan (photo), and down to the goodol' Southeast. Which is 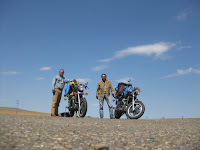 where I am right now, in absolute awe of the fact that there is any civilization on this planet that could carefully plant so many nice patches of grass and not remember to let any animals eat it. In fact, we pay close to four bucks a gallon to push some machine around and make the tops of the plants go away instead of making delicious meat for free. It's the little things that reveal our fundamental insanity as a nation.

However, I did sing a lot of patriotic songs and had a lot of I-heart-George-washington-and-kentucky-convenience-store-twang moments to make up for it. Today on a trail run in the Pisgah National Forest, Natasha found an Eastern Box Turtle that was probably hungry for wild muscadine grapes. None of us should forget that those kinds of things only happen in a small patch of the world around this one set of mountains on one of the American continents - and that's special.
Posted by Luke Padgett at 17:37 No comments: