Marchman, Iralu and Candler, here with a bottlenose dolphin stranded on Cumberland Island back in December. The lengthening of the rostral bone in whales and dolphins is one of the key pieces of osteological gymnastics that makes blowholes possible. Getting your nostrils to open on top of your head takes practice. Deleting your pelvis is also a significant move. Mosasaurs, ichthyosaurs and cetaceans all did it at one time or another. 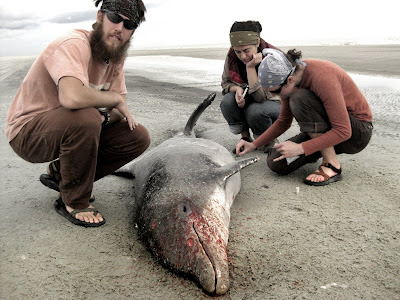 I've been kind of obsessed with timelapse for a few years. After watching an incredible documentary about big wave surfing Sunday, I'm reminded again that it's drive and vision, not tools and circumstances that make strong people create. Here's something from Vincente Sahuc, who has a cool name.


Almeria 2008 from Vicente Sahuc on Vimeo.
Posted by Luke Padgett at 11:49 No comments:

Barack Obama is President of the United States of America.
In Sewanee, we watched the inauguration on the big screen with standing ovations and whooping delight. It feels great to be from this continent again. I didn't expect to be excited by the event, but I was. First, Obama became president quietly at noon, during a piece of nouveau string music with touches of the Shaker Hymn. He then spoke in a coherent way, addressing people of various religions, including nonbelievers on mostly equal footing. Thanks for the shoutout. Finally, as if to apologize for the abysmal invocation by the hula hooper who wrote the purpose driven life, a fantastic benediction was offered by Rev Joseph E. Lowery, who made me actually want to go to church. O happy day.

My Dad at Work

Calvin Padgett is a carpenter.
It's about 6:17 am, so that means he is probably brewing up some Folgers and warming up the truck. Both my parents have worked hard all my life to make sure my brother and I had every chance. When it's cold outside, Dad goes to work. When it's raining, he goes to work. When it's sunny and nice, he goes to work. He has worked with wood as long as I can remember, and with my Grandpa's company in the '80s, put the finishing touches on some spectacular churchouses. Here is a house in Orchard Knob, Chattanooga, where we wrestled a big heavy window into a slightly bigger hole in the wall. If you see him around town, he drives a red chevy truck that says "N. America 1st, Hire USA." He is 50 today. Happy Birthday, Dad. 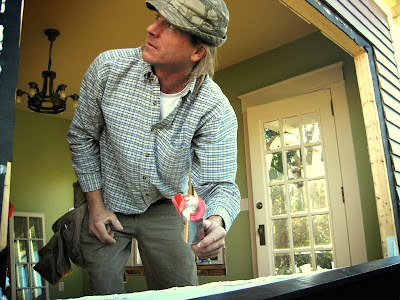 Posted by Luke Padgett at 06:17 No comments:

The latest from our Angel Mtn A\V club. Shot by S Alvarez a few days over new year's, here's how an SLR camera can look - cut like film. Music by Juana Molina. Kids are cute. Know anybody who wants a hot movie shot cheap?

Here's a taste of what we've been up to on the Mountain. After a drought, this was a good day - lots of rain, and some absurdly frigid water. Wetsuits, drytops, cold toes, indie rock.


Earth from Below, Sub Solomon Cave Flood from Stephen Alvarez on Vimeo.

Posted by Luke Padgett at 18:05 No comments: 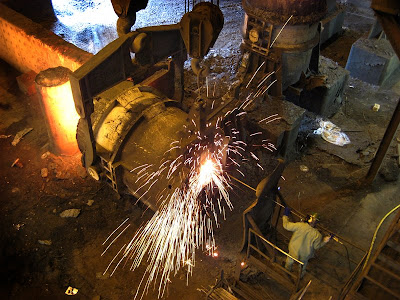 This man works at a steel mill in Birmingham Alabama. An arc furnace with two carbon electrodes the size of telephone poles sends bolts of hot lightning through pieces of old cars and refrigerators until you can pour amalgamated metal into giant tile-lined crucibles hanging from moving tracks three stories above. After they dump the molten slug into the cooling chamber, this guy rheems out the bucket for the next round. I was wearing an insulated suit just to be this close to the dude. His job is somewhat manly.

Yesterday, my Dad was telling me about mercury settling and gold processing the old-fashioned way. We do a lot for metal, as this month's NG Magazine describes. I dug out some notes from a geology class, and read about prospectors who used to boil off the mercury/gold slurry in giant open cauldrons while standing in the fumes to stir it with a stick. In Birmingham, they're just stretching those melted cars out into some spaghetti re-bar to reinforce your average overpass or skyscraper. That company is the state's number one recycler. This summer, chinese imports drove scrap prices so high that we junked an old wrecked chevy van for almost $700. With gas high, that's more than you could sell it for if it were galloping flawlessly down the road.
Drive on.
Posted by Luke Padgett at 10:16 No comments: