www.alvarezphotography.com/Fern.mov
Posted by Luke Padgett at 19:05 No comments: 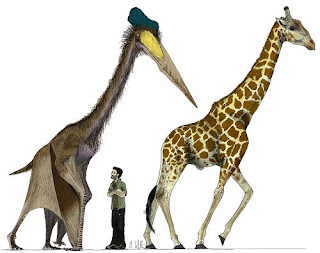 a new reconstruction of Quetzalcoatlus northropi. here.
I'm reliving a sort of pterosaur kick I went on while gliding in Eichstätt and thinking about the evolution of flight.  Bats, birds, and pterosaurs.  A thoughtful friend just gave me a wooden Pteranodon blown up from one of those small wooden kits - only its wingspan is about a meter and a half as it hangs now in the Green House.  It reminds me of the massive Quetzalcoatlus cast hanging in Willibaldsburg Castle.  One of the most striking things about a Quetzalcoatlus skeleton, after you get over its absurd size, is the proportions of the neck vertebrae.  This drawing doesn't show it, but it's a particularly good juxtaposition.  I will tell you why.  Giraffes have long necks, but like all other mammals, they have only seven neck vertebrae.  You have seven neck vertebrae.  Great blue herons and flamingoes and snakes and turtles have long necks, but they have an unpredictable number of vertebrae.  That's because they stay relatively the same size, and just stack up a few more when their necks need to be longer.  Not so with Pterosaurs.  All pterosaurs have just nine neck vertebrae.  That means that they are each like two feet long - like a giraffe's neck, it is built by extending the size of a fixed number of verts.
Posted by Luke Padgett at 10:57 No comments: