Yeah, I know it was yesterday. But I like the name of the holiday. This time last year, I was in Edinburgh wandering around doing not much. Felt like I wanted to be in a boxing match. This year, my Dad lit a commerce fire in the driveway to dispatch our christmas detritus accumulated over the holiday. To purge the year properly, you ought to jump over a fire like this one around the winter solstice - which is, incidentally, why we celebrate the nativity in the middle of the winter, and not when it actually might have happened. Chalk another one up to paganism, and keep the Pantheon in Xmas. 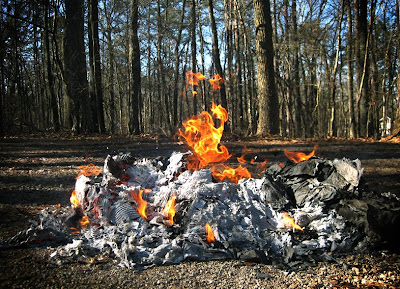 What's available just out your back door is usually astonishing. Here is Laura's bug collection, gotten mostly right here in Sewanee. Great, you say, bugs. Or you might think ''dang, that is one sweet Coleopteran...round.'' But bugs are people too. Why would I say that? Because one of the insects below practices full-on prostitution. Let me explain. 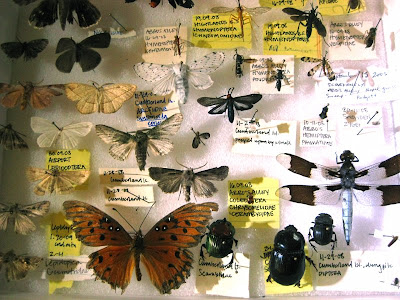 The Mecopterans (aka Scorpionflies, Hanging Flies) are not true flies, but have a highly derived club scene. These things are weird enough to be of their own order, the Mecoptera (long-winged things). You have to be long-winged to pull off what they do. The male Hanging Fly stakes out a branch and waits for unsuspecting passers-by of eatable size. Using four of his six available legs, he snatches, say, a loitering gnat or mosquito. His other two legs are meanwhile employed, sliging him about under a gravity perch while he dispatches the victim like a nightmare axe-murder trapeze artist. 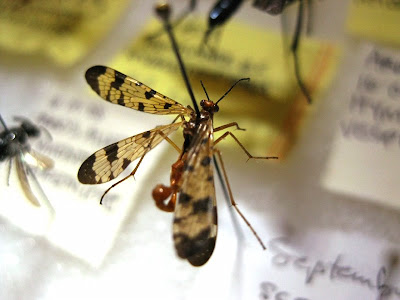 Now, with those long wings he sets out with the dangling corpse prize and searches out a she-Mecopteran. He presents her with this flaccid exoskeleton full of gifted bug meat, and if she is congruently goth in attitude, she will accept the advance, taking hold of half the carcass as a prelude to hooking up. They unite and fly about towing between them what scientists call, no joke, the 'Nuptial Gift.' But get this: those same scientists have demonstrated that the heft of said gift is directly proportional to the time these bugs spend in each other's embrace. The larger the Nuptial Gift, the more sustained the copulation, the better chance the female gets properly inoculated with the man-Mecopteran's bug sperm.

So the duration of this flying Ménage-à-trois is determined entirely by the size of the dude's hunting trophy. Sound familiar? And this happens in midair. For real.

Back through things I don't always remember seeing - the collision of energy sandwiching the surface of the earth makes all shapes. Barrier islands from tides, karst pinnacles from old up and down seas now getting water pulses from the rain, radiation from the sun, traffic from millions of fascinating little lives. The Tsingy de Bemaraha, Mahajanga Madagascar. 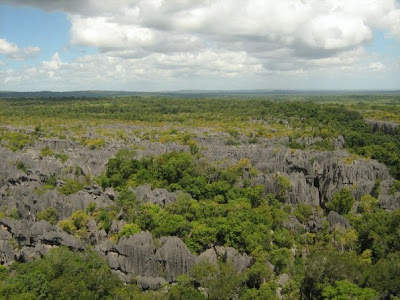 Posted by Luke Padgett at 11:34 No comments:

The sea is always coming and going. Twice a day the tide goes in and out. Every few million years, the coastlines are shifted miles in and out. If you've ever seen a monthly tide chart, or a line graph of transgressions and regressions through geologic time, the images are strikingly similar. One of the great convergences of these two periodic ocean pulses are Georgia Barrier Islands. Long-term sea-level changes make barrier islands possible while Oceans get bigger. The moon-coupled short-term tide ebb and flow make the salt marsh possible. The salt marsh makes Captain D's possible. 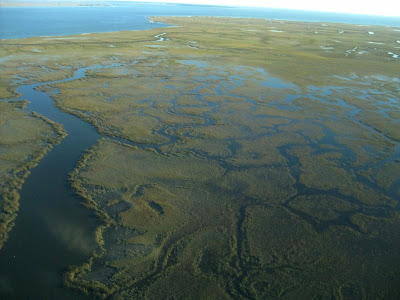 The picture here shows the result of tide pulses acting on sediments every day between the islands and the land, away from waves. This is what it looks like at low altitude from a small plane full of friends. A whole load of marine organisms uses this cushy zone for raising tender young that grow up to be your tender fish sticks and popcorn shrimp. Sam eats shrimp and blue crab. He also thinks barrier islands and marsh are good offspring-raising grounds for humans.

That's why we know about things like tide and have the sense to ask about historic sea level at the largest scales. Because there are some people who are willing to be in, and become part of, a place. To watch its rhythms, to appreciate its beauty and its part of the story. By lightly populating the right spots on Earth with watchful people, and connecting them to a network of askers and listeners, we can almost hear the planet breathe. Tide charts begin to look like EKGs, seasons wiggle the toes, sunrises and sunsets blink and see.

It's a big rock. Somebody's gotta watch it. 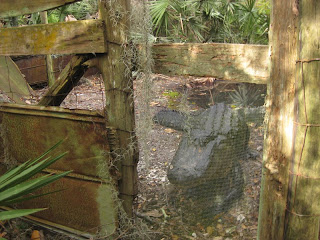