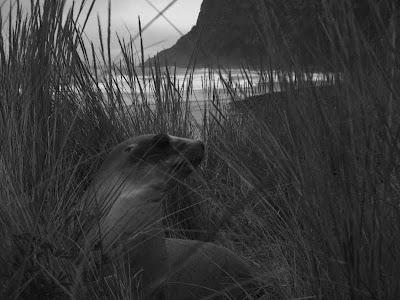 When crawling around in waist-deep grass at twilight, you need to remember the giant weasels. Because you're not likely to see a Kekeno before you snuggle up next to it, and even less likely when you smell one. It's like finding a can of sardines in a steamy litterbox. They're funny without their feet though. This one was just ambling along, and wouldn't even stop for poor Peter the Norseman. We had to say his name a lot of times before he finally lunged out of the seal's flop zone. There were two on our other side, which put us in the middle of a small territory dispute with a lot of Pinniped coughing and grunting. Good thing Richard is bipedal.
New Zealand Fur Seal, Boulder Beach, Otago Peninsula
Posted by Luke Padgett at 23:27